We are all aware of Autism Spectrum Disorder (ASD) and its signs and symptoms. Its common symptoms are difficulty in communicating, displaying of social skills, and repetitive behaviours.

However, there are certain signs that we may not know and are not that obvious to recognise. It is best to stay aware of all of the signs to detect the disorder early. Here are some signs that one should also look out for. 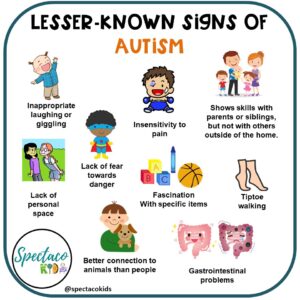 Many autistics show signs of laughing or giggling inappropriately. This can be due to sensory sensitivity, lack of communication skills, or trouble with high-level thinking. They may even laugh during serious situations. However, it is essential to identify what the autistic wants whether it is communication, attention, or is in stress.

Insensitivity to pain is one of the sensory abnormalities sometimes found in people suffering from the disorder. This lowered threshold of pain makes them experience pain in unusual ways. Their communication difficulties make it harder for them to make their distress known to others.

Showing skills with parents or siblings, but not with others outside of the home

Due to difficulty in communicating, autistics may feel anxiety and nervousness when socialising and demonstrating skills in front of people other than their parents or siblings. An encounter with an outsider in different settings may be a cause of distress for them.

People not suffering from the disorder usually know when not to invade someone’s personal space. However, this may not be the case with autistics. They may stand too close to others when they are talking, or they even tend to walk between speaking people. This behaviour may be socially disturbing for some, but they don’t realise their violation of others’ interpersonal space.

Lack of fear towards danger

This symptom is often confusing. It depends on the autistic as to where their focus lies. It is possible that they can just run into traffic or in deep waters. Those suffering from the disorder are in constant danger because they cannot comprehend the threats they are under.

Autistics often show this tendency when they are unusually charmed by certain things, such as toys, objects, or body parts. They can show excessive interest in these items and be so overly focused that it may get challenging to shift their attention away.

Tiptoe walking is also one of the less known symptoms of ASD. Autistics often find it hard to flex their ankles, hence they walk on tiptoes.

Better connection to animals than people

Autistics often find it easier to connect with animals than with people. Animals tend to reduce loneliness and lessen anxiety issues. Pets often serve as bridges to help the autistics communicate with people.

Children with autism often go through stomach and bowel issues more than a normal kid would. These gastrointestinal issues can include stomach aches, constipation, nausea, and diarrhoea.