Types of Play for Children

Types of Play for Children

Types of Play for Children:

As a child grows, he goes through multiple stages of play development. Apart from being fun, play is vital to a child’s development. Depending on their age, mood, and social setting, kids take part in six kinds of play, all of which are important for their healthy development.

Following are the six essential types of play that kids take part in:

This is the first stage of play and occurs in infants from birth to three months. However, it does not look like play at all, as the baby observes his surroundings or display random movements with no objective. It is important that parents allow their child to have this play even if it is just the baby wiggling their hands and feet in the air. This stage of play sets the stage for future play exploration. 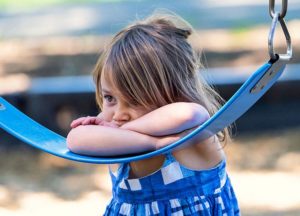 Independent or solitary play is what the names suggest, your child playing alone. This stage emerges by age two and is most common in children aged between 2 and 3. In this kind of play, the child plays with stuffed animals, legos, toy figures dolls, blocks, etc.

This type of play is important as it teaches a kid to keep himself entertained, which sets the path to him being self-sufficient in the future.

Onlooker play is when a child only observes what you or other children are playing. This play emerges for children aged two and three years old. Watching others help a child gain confidence and learn how the other kids are playing and interacting.

When a child plays near or alongside other children and does not play with them, it is called parallel play. Despite playing separately, children learn quite a bit from one another. Though they appear to be immersed in their own play, you may often find them mimicking the other’s behavior.

Associative play begins between ages three or four, is also similar to parallel play; it features kids playing separately from one another. They are each playing on their own but are engaging with one another. This stage of play helps children develop social skills. 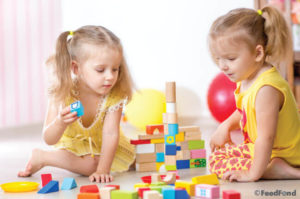 Typically occurring between four and five years of age, this is the stage where children truly start playing together. They work together and organize their own play. Cooperative play sets the stage for future interactions as your kid matures into an adult. 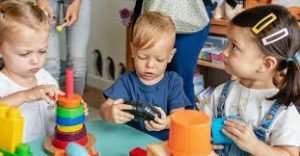 Other Types of Play:

When a kid plays on a sports team, he is engaging in competitive play. When he is a part of a team, he learns to be a good sport, learns rules, turn-taking and how to cope with defeat or celebrate a victory.

Constructive play is an organized form of play that is goal oriented and thoughtful during which your child is engaged in constructive play using materials to create something. For example, building legos, blocks or making a track for toy car. He learns cognitive skills when he tries to figure out on how to make a block tower or making a fort out of couch pillows.

Physical play gets your child moving like running and jumping or picking up a pencil. This type of play helps in keeping your kids fit and enjoying physical activities. Physical activity also contributes to brain growth and attention to academic subjects.

When children play dress-up games, such as becoming a doctor, princess or a spy, it is called fantasy or dramatic play. Through role-play, children are able to learn to share, cooperate as well as learn about functioning in the greater community. Through fantasy play, your child’s imagination gets a workout.

Symbolic play helps kids learn to express themselves and process their ideas and emotions. This type of play includes vocal activities such as singing or rhymes, graphic arts like coloring, drawing, counting, or making music.

The benefits of play: