We’ve often heard people give their explanation of what autism maybe and unfortunately, not every time are the facts accurate. Overtime, there have been lots of misconceptions surrounding autism. This blog explores these common misconceptions and what the real deal is. Some of the top misconceptions are addressed below: 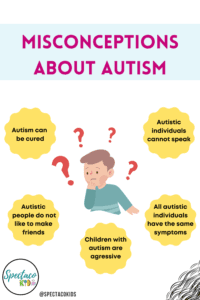 In truth, autism is not some behavioral or mental health disorder. Instead, it is a neurodevelopmental disorder that hinders an individual’s ability to communicate and interact with others as easily and effectively as other people can. Studies have shown that people on the spectrum have depicted abnormalities in the way their brain is structured as well as differences in their neurotransmitter levels. Additionally, people with such developmental disabilities are more susceptible to being diagnosed with other disorders that ultimately require more attention and care.

Up till now no cure has been found for autism. However, the effects of autism can be mitigated via early intervention and through the provision of adequate care during a child’s early developmental stages. There are many treatments that focus on equipping people on the spectrum with the necessary skills they require to keep up with the modern world. These require intensive training and time and patience. For instance, if autistic individuals were trained to improve their social skills through focused coping strategies, it would become difficult to identify them as having autism when amongst other people. With the right support, people on the spectrum can lead happy lives.

Almost all children at some point in their life show signs of anger, violence, aggression. Whether it be during playing, throwing tantrums to get something they want or when they just get into a casual fight with another child over their favorite toy for example. Similarly, autistic children are no different. They too have needs and sometime when those needs are not met, they resort to aggression when they are upset. Due to a lack of communication skills, unfortunately they cannot convey their feelings as effectively as other children, hence, causing a neural overload or a meltdown at times. An autistic individual could never intentionally mean to harm anyone, its just that they face difficulty expressing emotions and understanding them, thus, making them more sensitive and distressed overall.

Infact, autistic individuals have a very strong bond with those they are close to. This can include family, friends, their partners and even their children. It is not that autistic individuals do not want to form good relationships, its just that they cannot identify what others think about them and due to a lack of social skills, they sometimes may not know how to respond to those that approach them. This might make them look unapproachable, when in truth, their poor communication skills are withholding them.

This is definitely not true as every individual is unique. Every person on this planet has different abilities, strengths, needs, emotions. No one is exactly like another. This also why it is called autism “spectrum disorder”, because across the spectrum, symptoms vary when it comes to social skills, physical, emotional or sensory needs.

Savant skills are highly specialized skills, like photographic memory or the ability to tabulate difficult mathematical questions in within minutes! It is true that every individual has certain strengths and skill sets that are unique to them; and while autistic people have a higher chance of possessing these savant skills, about only ten percent often do.

This is particularly false as many people on the spectrum have been diagnosed with other issues alongside ASD. While some may be diagnosed with just autism, others who are classified as “neurodivergent”. Some common conditions that co-occur with ASD (also known as “comorbidity”) include Seizures and Epilepsy, Fragile X Syndrome, Anxiety, Disrupted Sleep, Motor Challenges, Intellectual Disability etc. These comorbid conditions can appear at any point in time in a person’s life or may even be present since birth. However, whenever diagnosed, it is imperative that appropriate help is sought to decrease the effects of symptoms at an early stage.

Autism affects every child’s communication differently. While some may develop speech early on, other struggle with it until later stages and need additional help. Some individuals might be shy whilst other might talk about their favorite subjects at length. It is not that autistic individuals do not speak; they just have trouble doing so and with the right support and encouragement they can conquer their shortcomings to quite an extent.

People on the spectrum are very capable of experiencing all sorts of emotions and feelings. In fact, they might even be more sensitive when it comes to emotions than we typically are. How each of them chooses to express themselves greatly varies and no one autistic individual can be compared to another. To understand them better, it is important to understand their condition and how it affects them specifically. Additionally, one must be patient and empathetic when dealing with an autistic individual. Even though they may feel a lot of things, they cannot convey their feelings as vividly as others can, causing others to misunderstand them.

There is no authentic evidence that vaccinations cause autism. Whilst not vaccinating children has led up to life-threatening diseases, the opposite is certainly not true in this case.

Lots of misconceptions have developed around autism overtime, most of which have been passed on from previous times. However, it is important to understand the true nature of autism and spread accurate information so that people can become more aware and are more empathetic towards such people, rather than viewing them as outcasts.